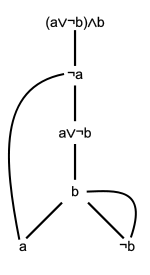 This is a programming assignment. You will be provided with sample inputs and outputs (see below). Please understand that the goal of the samples is to check that you can correctly parse the problem definition and generate a correctly formatted output. The samples are very simple and it should not be assumed that if your program works on the samples it will work on all test cases. There will be more complex test cases and it is your task to make sure that your program will work correctly on any valid input. You are encouraged to try your own test cases to check how your program would behave in some complex special case that you might think of. Since each homework is checked via an automated A.I. script, your output should match the example format exactly. Failure to do so will most certainly cost some points. The output format is simple and examples are provided. You should upload and test your code on vocareum.com, and you will submit it there. You may use any of the programming languages provided by vocareum.com.

Your code will be tested as follows: Your program should take no command-line arguments. It should read a text file called “input.txt” in the current directory that contains a problem definition. It should write a file “output.txt” with your solution. Format for files input.txt and output.txt is specified below. End-of-line convention is Unix (since vocareum is a Unix system).

Note that if your code does not compile, or somehow fails to load and parse input.txt, or writes an incorrectly formatted output.txt, or no output.txt at all, or OuTpUt.TxT, you will get zero points. Please test your program with the provided sample files to avoid this. You can submit code as many times as you wish on vocareum, and the last submitted version will be used for grading.

RipeApe pharmacy is developing a self-service automated system to alert customers about potential drug interactions for both prescription and over-the-counter drugs. Many medications should not be taken together or should not be taken if a patient has certain symptoms and allergies. Evaluating all the criteria for whether a patient can take a particular medication requires the patient’s medical history and expert knowledge from a health care provider. The system, however, can provide an instant guideline to keep patients informed and minimize the risks.

You are assigned by RipeApe to develop a beta version of the system using the first order logic inference. Patient history and drug compatibility data will be encoded as first order logic clauses in the knowledge base. The program takes a query of new drug list and provide a logical conclusion whether to issue a warning.

You will use first-order logic resolution to solve this problem.

The first line contains an integer N specifying the number of queries. The following N lines contain one query per line. The line after the last query contains an integer K specifying the number of sentences in the knowledge base. The remaining K lines contain the sentences in the knowledge base, one sentence per line.

Each sentence in the knowledge base is written in one of the following forms:

For each query, determine if that query can be inferred from the knowledge base or not, one query per line:

Each answer should be either TRUE if you can prove that the corresponding query sentence is true given the knowledge base, or FALSE if you cannot.

Examples and test cases are for the purpose of testing logic inference in this homework only. They do NOT represent factual information on drug interactions.