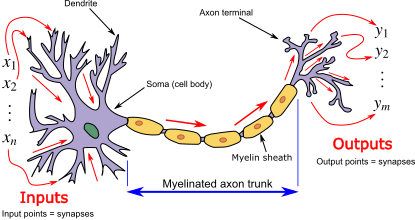 The figure below shows a 2-layer, feed-forward neural network with two hidden-layer nodes and one output node. x1 and x2 are the two inputs. For the following questions, assume the learning rate is = 0.1. Each node also has a bias input value of +1. Assume there is a sigmoid activation function at the hidden layer nodes and at the output layer node. A sigmoid activation node, xi is the ith incoming input value, and n is the number of incoming edges to the node.

Consider the following graph representing 7 countries on a map that needs to be colored using three different colors, 1, 2 and 3, so that no adjacent countries have the same color. Adjacencies are represented by edges in the graph. We can represent this problem as a CSP where the variables are the countries and the values are the colors.

You are only required to implement the following methods in the classes NNImpl and Node:

The dataset we will use is called Semeion. It contains 1,593 binary images of size 16 x 16 that each contain one handwritten digit. Your task is to classify each example image as one of the three possible digits: 6, 8 or 9. If desired, you can view an image using the supplied python code called view.py Usage is described at the beginning of this file (this is entirely optional if you want to view what an image in the dataset looks like. In other words, it has nothing to do with your implementation in Java).

Each dataset will begin with a header that describes the dataset: First, there may be several lines starting with “//“ that provide a description and comments about the dataset. The line starting with “**” lists the digits. The line starting with “ ##” lists the number of attributes, i.e., the number of input values in each instance (in our case, the number of pixels). You can assume that the number of classes will always be 3 for this homework because we are only considering 3-class classification problems. The first output node should output a large value when the instance is determined to be in class 1 (here meaning it is digit 6). The second output node should output a large value when the instance is in class 2 (i.e., digit 8) and, similarly, the third output node corresponds to class 3 (i.e., digit 9). Following these header lines, there will be one line for each instance, containing the values of each attribute followed by the target/teacher values for each output node. For example, if the last 3 values for an instance are: 0 0 1 then this means the instance is the digit 9. We have written the dataset loading part for you according to this format, so do not change it.

We have created four classes to assist your coding, called Instance, Node, NNImpl and NodeWeightPair. Their data members and methods are commented in the skeleton code. An overview of these classes is given next.

The Instance class has two data members: ArrayList[Double] attributes and ArrayList[Integer] classValues. It is used to represent one instance (aka example) as the name suggests. attributes is a list of all the attributes (in our case binary pixel values) of that instance (all of them are double) and classValues is the class (e.g., 1 0 0 for digit 6) for that instance.

The most important data member of the Node class is int type. It can take the values 0, 1, 2, 3 or 4. Each value represents a particular type of node. The meanings of these values are:

Node also has a data member double inputValue that is only relevant if the type is 0. Its value can be updated using the method void setInput(doubleinputValue). It also has a data member ArrayList<NodeWeightPair> parents, which is a list of all the nodes that are connected to this node from the previous layer (along with the weight connecting these two nodes). This data member is relevant only for types 2 and 4. The neural network is fully connected, which means that all nodes in the input layer (including the bias node) are connected to each node in the hidden layer and, similarly, all nodes in the hidden layer (including the bias node) are connected to the node in the output layer. The output of each node in the output layer is stored in double outputValue. You can access this value using the method double getOutput() which is already implemented. You only need to complete the method void calculateOutput(). This method should calculate the output activation value at the node if it’s of type 2 or 4. The calculated output should be stored in outputValue. The value is determined by the definition of the activation function (ReLU or Softmax), which depends on the type of node (type 2 means ReLU, type 4 means Softmax).

NodeWeightPair has two data members, Node and weight. These should be self-explanatory. NNImpl is the class that maintains the whole neural network. It maintains lists of all input nodes (ArrayList<Node> inputNodes), hidden layer nodes (ArrayList<Node> hiddenNodes), and output layer nodes (ArrayList<Node> outputNodes). The last node in both the input layer and the hidden layer is the bias node for that layer. Its constructor creates the whole network and maintains the links. So, you do not have to worry about that as it’s already implemented in the skeleton code. As mentioned before, you must implement these three methods here. The data members ArrayList<Instance> trainingSet, double learningRate and int maxEpoch will be required for this. To train the network, implement the back-propagation algorithm given in the textbook (Figure 18.24) or in the lecture slides. Implement it by updating all the weights in the network after each instance (as is done in the algorithm in the textbook), so you will be doing a form of Stochastic Gradient Descent for training. Use Cross-Entropy loss as the loss function at the output nodes for the back- propagation algorithm. Details about Cross-Entropy loss are available at http://ml-cheatsheet.readthedocs.io/en/latest/loss_functions.html Finally, remember to change the input values of each input layer node (except the bias node) when using each new training instance to train the network.

We will test your program on multiple training and testing sets, and the format of testing commands will be:

where trainFile, and testFile are the names of training and testing datasets, respectively. numHidden specifies the number of nodes in the hidden layer (excluding the bias node at the hidden layer). learnRate and maxEpoch are the learning rate and the number of epochs that the network will be trained, respectively. To facilitate debugging, we are providing you with sample training data and testing data in the files train1.txt and test1.txt. We are also providing you the file testcases.txt which contains three example test cases. The outputs for these three test cases are also provided. A sample test command is

You are not responsible for handling parsing of the training and testing datasets, creating the network, or printing test dataset results on console. We have written the class DigitClassifier for you, which will load the data and pass it to the method you are implementing. Do NOT modify any IO code. As part of our testing process, we will unzip the java files you submit to Canvas, call javac DigitClassifier.java to compile your code, and then call it with above command, with parameters of our choice.

Hand in your modified versions of NNImpl.java and Node.java that include your implementation of the back-propagation algorithm. Also submit any additional helper .java files required to run your program (including the provided ones in the skeleton). Do not submit any other files including the data files (no .class or .txt files). Also, all the .java files should be zipped as <wiscNetID>-HW4-P3.zip for submission to Canvas.