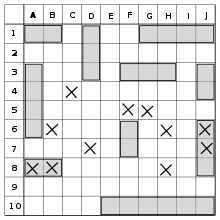 You are to implement the game of Battleship. If you’ve never played Battleship I suggest that you play this version.

You are of course allowed to have more than these classes (I certainly did) but you must have the ones specified and they must be named exactly as above.

Then fill in the parameter fields with the command line parameters. Each parameter is separated by whitespace. If one of your parameters has whitespace enclose it in quotes.

The configuration file has the following format

All ship names will begin with a unique character and will not start with X, O, or * (the hit, miss, and blank characters). This will be important later when we are displaying the ships on the board.

As an example, the classic game of battleship has the following configuration file

These contents of these files are left up to the user but will always be correctly formated and logically consistent. For example, there will never be a configuration file where the length of the ship is larger than one of the board’s dimensions. Another legal configuration file could be

Setting Up The Game

For each player in the game

A ship placement is invalid if

On each players turn

A Firing Location is invalid if

A board should be displayed like the following example

When ships are placed on the board you should use the first letter of their name to represent them. For example,

If you click on the test cases on Mimir you should be able to see what the output of the program looks like. Your output has to match mine so please be sure to read over some of those examples.

Your program will be run as python3 BattleShip/main.py path_to_config_file so make sure that it can be run like this