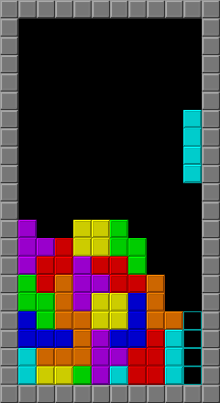 For this project, you will implement code for the Tetris game. The graphical user interface has been provided to you in a package called gui. No part of the assignment involves you making any changes to code in this package. You will be implementing some of the functionality for the Tetris game by modifying classes provided to you in the model package.

This project will allow you to practice two-dimensional arrays, abstract classes, inheritance, and test development.

You are provided with the following packages:

A tetromino is a game piece that can have one of seven shapes, each with a distinct color as shown in the table below.

The diagram below shows the progression of each tetromino as you rotate counter-clockwise by 90 degrees.

Although the layout of a tetromino is set (because its shape is set) for each of the 4 possible orientations, the location of a layed out tetromino will change due to rotation and moving the tetromino left/right. The diagram below illustrates this for the I tetromino.

A random sequence of Tetrominos will fall down the playing field from the centre. The goal of the game is to fill the gaps horizontally. When an entire row is filled, the rows above it will collapse down by one row. A player can move a tetromino left/right using the corresponding arrow keys. They can also rotate the tetromino left (counter-clockwise) 90 degrees at a time by pressing the z key.

Some things to note are:

You can watch a video of the completed game being played here. For more information about Tetris, click here.

You are expected to implement methods for the Tetromino, I, J, L, O, S, T and Z classes. The other classes have been provided and you should not modify them. You should familiarize yourself with the Tetris Class.

We encourage you to run the game GUI and interact with the game. However, such an interaction is not guaranteed to test the full range of your code. As such, we also encourage you to write student tests. Student tests demonstrating a particular issue you are encountering with your code will be requested upon seeking help during office hours.

To submit your project, zip the project folder and upload the zipped file to gradescope.

Tips on Getting Started

You have been provided with a class to represent each possible Tetris piece (a tetromino). We suggest that you start with the simplest tetromino (like O or I).