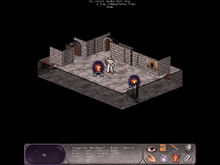 For this project you will simulate a game where different characters interact on a 2-dimensional grid and where each cell in the grid can contain zero, one or multiple pieces. A game playout continues for n iterations or until a victor emerges. During each of the iterations all cells of the grid are updated synchronously according to the rules stipulated in Section 3. There are six main classes of pieces: Warrior, Healer, Potion, Weapon, Water, and Magic Crystal pieces. The details relating to each piece’s function and characteristics is defined in Section 2. As the game progresses, the warriors battle one another and interact with other pieces on the grid; your program should print visualisation information after each iteration in the game and produce warrior statistics once the game has terminated.

The warrior pieces are the main characters of the game and begin the playout with an allocation of 6 different attributes; as the game progresses these warriors are matched against one another in battle until a victor emerges.

There are four types of warriors: Stone Warriors, Flame Warriors, Water Warriors and Air Warriors. Each type of warrior has a unique special ability as defined in Section 3.9.

Healer pieces are those that bring order and peace to the world around them, the game has two defined types of healer pieces namely the Restorer and the Peacemaker, their roles are defined in Section 3.10.

Drinking an unknown potion can be a gamble for a warrior, unknowing what the affect of the potion might be. The game has three types of potions, each with their own affect on a warrior.

Water flows around the grid and benefits each warrior according to the rules in Section 3.12.

A maximum of 1 magic crystal may be present in the game and when activated, the crystal causes all warriors except for those four that activated the crystal to be removed from the game; see Section 3.13 for the rules relating to this piece.

Neighbourhood of a piece

Each game playout is made up of n iterations (n is defined in the program setup files) and for each iteration, every cell in the grid is updated according to its neighbourhood. Each cell is updated synchronously, relying only on data from that iteration and not any updates made during the transition to the next iteration.

Each warrior is able to move around the grid according to their individual-specific sequence of moves, executed one position per iteration. Since each list of moves is of finite length, when the end of the list is reached then the player should `wrap’ the moves around and start from the beginning of the list again. For example: If a warrior has the list “wassdq” as their moves list, then for 8 iterations they would perform the moves “wassdqwa”, one per iteration. See Section 5.0.1 for explanation of what direction each movement character represents.

A maximum of 1 healer, 1 potion, 1 magic crystal, 1 weapon and 1 water piece may together be present on a cell; warrior pieces however can occur with multiple pieces at a cell at any one time with the constraint that a maximum of 10 warrior pieces will occur on the same cell, see Section 5.1.3 for exception handling for situations where this rule is violated.

High levels of health indicate that the player will likely be able to continue in the game for quite a few iterations while low levels of health indicate that the warrior might soon leave the game. If the warrior experiences a drop in health equal to or below 0%, the warrior loses the game and is removed from the grid (this removal comes into effect in the following iteration). Your program should then immediately print “A warrior has left the game!”.

For each iteration and each warrior, the health of the warrior must be updated according to the pieces that are present in the warrior’s neighbourhood for that iteration. Note that the cell that the warrior occupies is not included in its neighbourhood and the warrior does not interact with pieces present at this cell unless explicitly specified by a rule.

Each weapon has an allocated amount of offense power that it adds to the warrior that carries it. When a warrior piece occupies the same cell as a weapon piece, the warrior puts the weapon in their inventory; after which the weapon is no longer on the grid. If multiple warrior pieces are present on a cell as well as a weapon piece then the warrior with the highest offense power acquires the weapon. In a situation where multiple warriors tie with the highest offense power then the warrior with the lowest ID value obtains the weapon.
Each warrior is only capable of holding a certain number limit, L, of weapons at a given time but since warriors never refuse to pick up new weapons, the warriors drop some weapons when they exceed L. This dropping takes place in first-in-first-out order i.e. the weapon least recently picked up is the weapon dropped. If a warrior has a full inventory then it is guaranteed that they will, for the rest of the game have a full inventory since each time they pick up a weapon they will drop the one least recently obtained. Note that when a weapon is dropped, its offense benefit it reversed.
In the situation where two or more warriors are present at the same cell where this cell also contains a weapon piece, then if a warrior picks this weapon up and due to a full inventory also drops a weapon then the dropped weapon may not again be picked up until the next iteration (i.e. the weapon cannot be picked up in the same iteration in which it was dropped).
If a warrior loses and is removed from the grid then all the weapons in their inventory are removed from the game with them.

When a warrior has one or multiple potion objects in its neighbourhood, the warrior drinks all available potions and is affected according to the rules in Section 2.3.1. Potions do not disappear from the grid once used. A few specific situation outcomes should be noted:

Only a single water piece may be present in a cell on the grid and the pieces act according to the following rules:

Water warriors gain power from the water around them; for each water object in the water warrior’s neighbourhood, its offense power is boosted by 1% (note that this is a permanent change).

When the magic crystal has exactly 1 of each type of warrior in its neighbourhood, configured in the formation one warrior per corner of the neighbourhood, then the crystal is activated and removes all warriors from the game except for those 4 that activated the magic crystal. The crystal itself is then removed from the grid and no warrior battles occur for that iteration. Your program should immediately print “The Magic Crystal has been activated! Four warriors remain…”.

The starting grid’s stats and thereafter the stats for each iteration of the game should be printed, your program should output command-line statistics for each warrior still present on the grid. If the number of iterations to run is zero then you should immediately print the statistics of the starting board. The output order should list the information for each warrior starting with the top left corner of the grid and ending with the bottom right corner of the grid. The grid should be traversed similarly to the pattern of ordering shown in Figure 4 (i.e. row for row (downwards direction), traversing the row cells left to right). If multiple warriors are present at one cell on the grid, the printing order should be in ascending order of the warrior object’s IDs.
Figure 4: Example grid traversal order
Each warrior’s statistics should be output on a new line and each value should be separated by a space and then a comma character. The values are id, age, health, offense power, defence strength, number of weapons in their inventory, the type of warrior they are (“Stone”, “Flame”, “Water” or “Air”), the row index and the column index of their position on the grid. See Table 1 for an example of this format.

Visualisation output should be printed to the command line in the format described below, once before any iterations (detailing the starting state stats) and then once after every iteration of the game execution; each visual grid should be matched with its statistics printed directly afterwards. Please see the sample output files provided on sunLearn for examples of the output format. If the number of game iterations is zero then you should print the visual representation of the starting grid, the warrior statistics and terminate. You have two options of output format, please specify in a ReadMe.txt file included in your submission whether you used the plain visualisation or the colourful visualisation output method since different scripts will be used depending on your choice. Please note that the marks will be exactly the same whether you choose the plain or the colourful output versions, it is purely a choice of your own preference and since there could be problems with plugin downloads etc in the case of the colourful version the plain version is absolutely sufficient.

After each iteration in the game execution, your program should print the updated grid in the format of example output Figure 5. Each piece type has a different character representation as defined in the list below; the displayed item for each cell should be separated by a space character and a new line must be printed after the final row (although not shown in the Figure 5 screenshot).

Since different pieces may overlap and occupy the same cell at the same time the order of visualisation priority is as follows where those pieces higher in the list should be prioritised in the display over those lower in the list.

If an iteration occurs where only 1 warrior is present on the grid, your program must print the grid as described above and follow it with the string “A warrior has been proven victor!”. The game playout should be terminated at this point and nothing else printed.

If an iteration occurs where 0 warriors are present on the grid, your program must print the grid as described above and follow it with the string “No warriors are left!”. The game playout should be terminated at this point and nothing else printed.

The colourful visualisation allows certain piece types to be colour coded. The format follows the rules in Section 4.2.1 but uses ANSI Escape Codes to produce colour-coded command-line output. These ANSI escape codes can be used in linux terminal and IntelliJ IDE without any extra plugin downloads/setting changes but eclipse necessitates a plugin download before the colours will display in the eclipse console; instructions for this are listed below.
Eclipse ANSI Escape Code plugin instructions:

It is of the utmost importance that you use the colour codes defined in ConsoleColours.java (on the SunLearn 144 home page under Project 2020). You should add this colour library to your project and use printing statements in the format of Figure 8 instead of those ordinarily formatted as Figure 7.