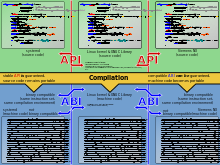 For this project you are to write routines that perform standard queuing functions. The functions work on multiple queues, and structure each queue as a doubly linked, circular list.

A queue consists of a head-pointer and a set of q-elements.

A q-element is a structure, consisting of a prev and next pointer, and a payload consisting of 1 integer. The header is a pointer to the first element of the queue. The head pointer is “null” if the q is empty.

The functions that you implement are:

Note: All the routines work on pointers. They do not copy q-elements. Also they to not allocate/deallocate space (except NewItem()). You may choose to implement a FreeItem(item) function - optional.

The routines should be implemented in C under the Linux operating system. If you are not familiar with Linux and/or do not have it installed. Please use a Ubuntu Virtual Machine. For more details/questions post requests on the discussion board.

All the above routines and data structures are to be placed in 1 file, called “q.h”. Do not include other files into this file. The test routines can be in “proj-1.c” and this will include q.h and other standard header files.

Write test routines that thoroughly test the queue implementation. Use multiple queues. Pay special attention to deleting the last element of a q. Also make sure “RotateQ” is behaves properly (strange behavior of this routine means the insert/delete routines have bugs.)

Further warning: Bugs in the Q routines have been the #1 cause for strange errors in the project, always. Careful that you get it right, else things will go bump later.

Using the queuing routines (not all will be used) this project will implement the ability to run multiple functions as threads, using non-preemptive scheduling.

The queue items defined in your q.h file has to changed, to be of type TCB_t. The TCB_t and an initialization routine are provided in a header file tcb.h. Note that TCB_t has previous and next pointers along with an ucontext_t field to store a thread context.

There is a routine in the tcb.h file called init_TCB, which is used to initialize a TCB for a new thread. The arguments to init_TCB are:

Write a routine called start_thread and put it in a file called “threads.h”. Also routines defined in Step 3 will go into this file. You will need to include q.h into threads.h. The code for start_thread looks like:

Write the routines called “yield” and “run” which cranks up the works (and put them in threads.h). These routines are defined as:

Each test case will have two numbers of the form
A,B
Here A is the total number of threads and B is the number of times each thread should be executed.
For example if a test case input is

2,3
You should output the following

Your project must consist of 4 files

All 4 files are to be ZIPPED into one zip or gzip file. The name of this file should reflect the name of the student (abbreviated, do not make it too long).