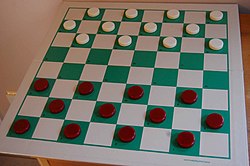 This is a programming assignment. You will be provided sample inputs and outputs (see below). Please understand that the goal of the samples is only to check that you can correctly parse the problem definitions and generate a correctly formatted output that contains a valid, but not necessarily good (or the only possible) move. In most situations, several moves will be possible, so your move may differ from our example and still be perfectly valid. You should not assume that if your program works on the samples, it will work on all test cases. It is your task to make sure that your program will work correctly on any valid input. You are encouraged to try your own test cases or have your program play against itself to check how your program would behave in some complex situations. Since each homework submission is checked by a set of programs, your output should match the specified format exactly. Failure to do so will most certainly cost some points. The output format is simple and examples are provided. You should upload and test your code on vocareum.com, and you will submit it there. You may use any of the programming languages and versions thereof provided by vocareum.com.

Your code will be tested as follows: Your program should not require any command-line argument. It should read a text file called “input.txt” in the current directory that contains a problem definition. It should write a file “output.txt” with your solution to the same current directory. Format for input.txt and output.txt is specified below. End-of-line character is LF (since vocareum is a Unix system and follows the Unix convention).

Note that if your code does not compile, or somehow fails to load and parse input.txt, or writes an incorrectly formatted output.txt, or no output.txt at all, or OuTpUt.TxT, you will get zero points. Anything you write to stdout or stderr will be ignored and is ok to leave in the code you submit (but it will likely slow you down). Please test your program with the provided sample files to avoid any problem.

In this project, we will play the game of Checkers, the classic strategy board game. It is a version of the game draughts and is also called American checkers or straight checkers. It uses an 8x8 checkered gameboard. Each player starts with 12 game pieces placed on the dark squares of the side of the gameboard closest to them, as can be seen in the figure above. The side with the darker colored pieces is usually called ‘Black’ and the side with the lighter color is ‘White’. Black opens the game. The pieces move diagonally forward and can capture opponent’s pieces by jumping over them. Whenever a piece reaches the opposite side of the board, it is crowned king and gains the ability to move/capture both forward and backward. The game ends when one side wins or a draw condition applies.

One side wins when the opponent cannot make a move, which can happen in two ways: 1) All the opponent’s pieces have been captured. 2) All the opponent’s pieces are blocked in some way. A draw also applies in two cases: 1) Over 50 consecutive turns, there has been no material change on the board (no pieces were captured or crowned), or 2) The same exact position on the board has been reached 3 times (i.e., all pieces of the two players combined have been in the exact same places 3 times).

More details on the game can be found at https://en.wikipedia.org/wiki/English_draughts and we will also go over the gameplay for you below. Beware that many variants of this game exist, so please adhere to the rules described in this homework carefully.

This 8x8 variant of checkers is solved. Which means that when both players play a perfect game, the game comes to a draw. If you’re interested, you can check out the paper at the following link.

This also means that checkers doesn’t have a first or second player advantage, and it will always lead to a draw with perfect play. Note that we do not expect your program to play perfectly, nor will this be necessary to succeed at this assignment, but we wanted to note this so that you know that there is no advantage to the player that gets the first move.

Setup of the game

The setup of the game is as follows:

Here’s the visualization of this setup, as we will use in this homework:

We first describe the typical play for humans. We will then describe some minor modifications for how we will play this game with artificial agents.

In the image below, we show examples of valid moves (in green) and invalid moves (in red) for a regular and a king piece, as well as the different jump scenarios for a given toy scenario. A regular piece can only move in forward diagonals while a ‘king’ (with the crown symbol on it) can also move backward.

In this homework, your agent will play against another agent, either implemented by the TAs, or by another student in the class. For grading, we will use two scenarios:

In addition to grading, we will run a competition where your agent plays against agents created by the other students in the class. This will not affect your grade. The top agents will be referred to a contact at Google for an informal introduction. There will also be a prize for the grand winner.

A master game playing agent will be implemented by the grading team. This agent will:

Input: The file input.txt in the current directory of your program will be formatted as follows:

In this example, your agent plays a single move as white color and has 100.0 seconds. The board configuration is just the one from the start of the game, after black has made the first move.

Output: The format we will use for describing the square positions is borrowed from the algebraic notation used for chess, where every column is described by a letter and every row is described by a number. The position for a given square is given as the concatenation of these. Here’s a useful visualization on how we identify each square for the 8x8 checkers board:

As an example, in the input sample given above, black has moved their piece from position d6 to e5. Note that for checkers, valid moves will always land in dark squares.

Using the above notation for the squares on our gameboard, the file output.txt which your program creates in the current directory should be formatted as follows:

One possible correct output.txt is:

Here, black can only move backwards because the piece in d2 has been crowned king in a previous turn.

One possible correct output.txt is:

Which results in a white piece reaching the king’s row of the opponent and getting crowned king.

one possible correct output.txt is: