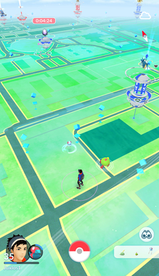 You are producing an augmented reality phone game which allows players to move around Melbourne, capturing virtual creatures called Phonemon (short for Phone Monster). The Phonemon are superimposed onto the physical world by locating them at points on the map and visualizing them via the app. (This fictitious game is based on Nintendo’s popular app Pokemon Go.)

We record about each player the date and time when they joined the game, their unique id, username and which team they chose to join (if they are part of the team). We regularly update their current location and level. Players begin on level 1 and level up according to their achievements. There are three teams to choose from: each has a colour, a (fictitious) leader, and a Phonemon mascot.

Each species has a title, description and can be of 1 or maximally 2 different “types”.

Individual Phonemons spawn regularly. We keep track of each one, recording when and where it spawns. A Phonemon starts as “wild” (the player column is null), and if it is captured, the player id is recorded. Each Phonemon has the species if belongs to and a “power” score (which may change as the game proceeds).

Our game allows in-app purchases of a range of items whose properties we record. Some items have extra properties that are recorded in a separate entity. We record the details of each purchase, including the item and quantity bought, and date and time of the purchase. Items can be of type ‘F’ (if they are food) or ‘M’ (if they are medicine), or none if they don’t belong to either of the two groups. Items have a title and price. Both food and medicine are worth some points stored in tables Food and Medicine respectively.

All locations in Phonemon are expressed as a pair of decimal numbers representing latitude and longitude. Calculating the distance between two points P1 and P2 requires a complex formula which you can read about at https://en.wikipedia.org/wiki/Haversine_formula. For the purposes of this assignment, you can use the following simplified formula based on the Euclidean distance, which works well enough in Melbourne:

A dataset is provided against which you can test your solutions to the assignment. To set up the dataset, download the file Phonemon_2021.sql from the Assignment on Canvas and run it in Workbench. This script creates the database tables and populates them with data.

The script is designed to run against your account on the Engineering IT server (info20003db.eng.unimelb.edu.au). If you want to install the schema on your own MySQL Server installation, uncomment the three lines at the beginning of the script that create the schema on your local server.

Note: Do NOT disable full_group_by mode when completing this assignment. This mode is the default, and is turned on in all default installs of MySQL workbench. You can check whether it is turned on using the command “SELECT @@sql_mode;”. It should return a string containing “full_group_by”.

When testing, our test server WILL have this mode turned on, and if your query fails due to this, you will lose marks. You can run the command:

to ensure that this mode is configured properly.

In this section are listed 10 questions for you to answer. Write one (single) SQL statement per question. Subqueries and nesting are allowed within a single SQL statement. However, you may be penalized for writing overly complicated SQL statements. DO NOT USE VIEWS (or ‘WITH’ statements/common table expressions) to answer questions.

To help us mark your assignment queries as quickly/accurately as possible, please ensure that:

Your submission will be in the form of an SQL script. There is a template file on the LMS, into which you will paste your solutions and fill in your student details (more information below).

This .sql file should be submitted on Canvas by 6pm on the due date of Friday 30 April. Name your submission as 987654.sql, where 987654 corresponds to YOUR student id.

Filling in the template file:

The template file on the LMS has spaces for you to fill in your student details and your answers to the questions. There is also an example prefilled script also available on the LMS. Below are screenshots from those two documents explaining the steps you need to take to submit your solutions.