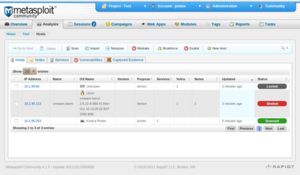 The goal of this project

Penetration testing is an important part of ensuring the security of a system. This project provides an introduction to some of the common tools used in penetration testing, while also exploring common vulnerabilities (such as Shellshock and setUID bit exploits).

On September 24, 2014, a severe vulnerability in Bash, nicknamed Shellshock, was identified. This vulnerability can exploit many systems and be launched either remotely or from a local machine. In this project, you will gain a better understanding of the Shellshock vulnerability by exploiting it to attack a machine. The learning objective of this project is to get first-hand experience on this interesting attack, understand how it works, and think about the lessons that we can get out of this attack.

This project requires the use of virtual box and multiple VMs.

The first step in any penetration test is to gather information about the network and servers you’ll be exploiting. In this task, you will perform network scanning and answer a few questions based on your finding. On startup, the shellshock VM listens to several ports for incoming messages.

In this task, you will launch the Shellshock attack on a remote web server. Many web servers enable CGI, which is a standard method used to generate dynamic content on Web pages and Web applications. Many CGI programs are written using a shell script. Therefore, before a CGI program is executed, the shell program will be invoked first, and such an invocation can be triggered by a user from a remote computer.

To access this CGI program from the Web, you need to first check the server VM is running. Then, you can either use a browser by typing the following URL.

For this task, your goal is to launch the attack through this URL, such that you can achieve something that you cannot do as a remote user. For example, you can execute some file on the server, or look up some file located on the server. When you successfully launch an attack, please execute the /bin/task2 program (which needs your GT username as the input) inside the VM. It will generate the submission hash for you.

For students that want to verify their work, here’s an example correct input/output for /bin/task2.

Now you’ve successfully launched the Shellshock attack, and you can execute commands on the server VM. However, during a penetration test, you likely won’t have time to craft a payload for every exploit you use. And, what if the server wasn’t in fact vulnerable to shellshock. How would you know if your exploit failed because it was wrong, or because there wasn’t a vulnerability?

That’s where Metasploit comes in. Metasploit is a standard in the penetration testing community. It allows pen testers to run precompiled exploits against a host, using predefined payloads. For this project, we’re going to use Metasploit to establish a reverse shell between your machine and the host machine.

Let’s first see how Metasploit works by using it to scan the open tcp ports of the shellshock_server VM. While this is a task better suited to tools like nmap (as seen in Task 1), it serves as a good demonstration of how to use a Metasploit module. If you’ve used Metasploit before, you can skip this introduction and go directly to the Task 3 assignments section at the end.

You’ll submit all of your answers for this section in assignment_questionnaire.txt. You should keep the reverse shell running after finishing Task 3, as you will need it in Task 4.

You aim to upgrade the privilege for your command shell by exploiting the setUID vulnerability. You will run \bin\task4 as the higher privileged user “shellshock_server”, not the default user “www-data”.

In Unix based systems, setUID is access rights flags that determine what users can run a program. For instance, when users want to change their password, they may run the passwd that requires root privilege. The setUID can help the user run the passwd with temporarily elevated privileges. However, if setUID is misused or setUID flags are misconfigured, it can cause a variety of vulnerabilities such as information leakage, unwanted privilege escalation, etc.

You may want to ransack \usr\bin for a program which has a higher privilege than the default user, and run \bin\task4 your\_userID in the shell spawned.

An invaluable part of any penetration test is password cracking. While there may be no known vulnerabilities in a system, a weak password could be just as damaging in allowing an attacker to gain access to a system (or view sensitive information once they gain access). We’re going to look at two kinds of weak passwords in this task: passwords that are too short, and passwords that can easily be guessed

To begin, start a Meterpreter shell (using a meterpreter shell payload) through the Metasploit shellshock module in Task 3. A Meterpreter shell is different from the reverse TCP shell in Task 3, as it allows you to run metasploit specific commands on the vulnerable machine (like download). Navigate to \home\shellshock\_server\secret\_files\. There are two encrypted .pyc files here. task51.zip is encrypted with zip, while task52.pyc.gpg is encrypted with gpg (a common file encryption tool in Linux). Download these two files (task51.zip and task52.pyc.gpg) to your Kali VM using the meterpreter.

We already know the developers of this web server aren’t very security savvy, since they let a shellshock vulnerability plus a setUID exploit give a high privilege shell on their machine. So, chances are they didn’t pick very secure passwords for these secret files. Your goal in this task is to crack the passwords of these two files using John the Ripper (a popular password cracker) and cewl (a password scraper).

The command line tools used in Task 5 are located in /usr/sbin on the Kali VM. In order to run them, you can either add /usr/sbin to the $PATH variable, or write /usr/sbin/ before each command.

That’s because John the Ripper is trying every possible combination of characters. If the password is too long (among other things), John the Ripper could run for years before it finds it.

But, just because the password is too long to be found incrementally, doesn’t mean it can’t be cracked.

Take a look at the shellshock.cgi page in the browser. It looks like it gives a link to a profile of the authors.

If the authors aren’t great at picking secure passwords, maybe the password is something about them that we can guess from their profile page.

Instead, let’s use a password scraper to create a custom wordlist for John the Ripper. For this project, we suggest using cewl. cewl is a relatively simple command line program that comes preinstalled on Kali, and creates password wordlists off of webpages. Since we want to get every possible password (including if the authors based the password off something on shellshock.cgi, or one of the landing pages), you should run cewl on shellshock.cgi, with the proper settings to ensure it follows the links all the way to profile.cgi (you may need to tune the cewl parameters). Report your cewl command in assignment_questionnaire.txt.

Then try running John the Ripper on task52.pyc.gpg with the wordlist (and the default wordlist rules for testing different permutations of the words). Report your John the Ripper command in assignment_questionnaire.txt.

Please use Gradescope to submit the assignment files. The link to Gradescope is found in Canvas under Courses tab Gradescope. In Gradescope under active assignments click project 1 to upload your files.

You should also include a “README” plain text file explaining how and why each piece of your solution works. Including it makes grading easier if we cannot reproduce your results. You may also include screenshots in your submission to show proof. If you use any outside sources not mentioned in this writeup, then the README would be a good place to mention them as well. Although there is no specific format for the README, since it is not officially graded, we do offer a sample format under sample-README.txt.

Please submit the files EXACTLY as requested to Canvas. DO NOT package them up (e.g., as a ZIP file). Any deviations may result in a deduction of your grade.

There is a 5-point penalty for not following the submission format shown.