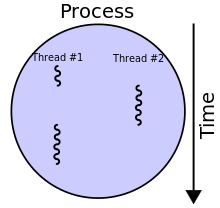 Threads and processes are key abstractions for enabling concurrency in operating systems. To gain a deeper understanding of how these abstractions are constructed, you will build the core of a userlevel threads package. Implementing kernel-level threads and processes is not much different, but we’ll do this assignment at user level since (a) installing new OS kernels on the teach.cs machines is problematic and (b) debugging user-level code is much easier than debugging kernel-level code.

Threads provide the illusion that different parts of your program are executing concurrently. In the de facto standard model of multithreaded execution, threads share the code, heap, and the runtime system. Each thread, however, has a separate stack and, naturally, a separate set of CPU registers.

This programming model also provides synchronization primitives so that different threads can coordinate access to shared resources, but we will leave those concerns for the next assignment.

For practical reasons, this assignment is done at user level: you will construct user threads by implementing a set of functions that your program will call directly to provide the illusion of concurrency. In contrast, modern operating systems provide kernel threads, and a user program invokes the corresponding kernel thread functions via system calls. Both types of threads use the same core techniques for providing the concurrency abstraction; you would build kernel threads in essentially the same way you build user threads in this assignment. Also, kernel processes are built using these techniques.

However, there are a few differences between kernel and user threads.

When a user-level thread makes a system call that blocks (e.g., reading a file from disk), the OS scheduler moves the process to the Blocked state and will not schedule it until the I/O has completed. Thus, even if there are other user-level threads within that process, they also have to wait. In contrast, when a kernel thread blocks for a system call, the OS scheduler may choose another kernel thread from the same process to run. Thus, some kernel threads may be running while others are waiting for I/O.

In the next assignment, we will simulate timer interrupts that cause the scheduler to switch from one thread or process to another by using POSIX signals. In your implementation, the threads library will “turn off interrupts” by blocking delivery of these signals using system calls. However, there is nothing to prevent the threads, themselves, from “turning off interrupts” the same way. Thus, even though we will implement “preemptive” threads, a “malicious” thread could turn off interrupts and not be preempted until it calls yield, thus hogging the CPU. Note that kernel schedulers don’t have this problem. Only the privileged code in the kernel can turn off the real timer interrupts.

With your threads library, a typical program will look something like this:

Here thread_main_i is a programmer-supplied “main” function that the ith thread starts executing when it is first scheduled to run after its creation. (Note that different threads may have the same “main” function.) The thread can perform useful work by calling any other functions in the program, or voluntarily yielding to other threads.

A key simplifying assumption in this assignment is that the threads are cooperative, i.e., each thread runs until it explicitly releases the CPU to another thread by yielding or by exiting. In contrast, preemptive threading systems allow a scheduler to interrupt a running thread at any time and switch the CPU to running a different thread.

You can use this function to perform any initialization that is needed by your threading system. Here, you should also hand-craft the first user thread in the system. To do so, you should configure your thread state data structures so that the (kernel) thread that is running when your program begins (before any calls to thread_create) will appear as the first user thread in the system (with tid = 0). You will not need to allocate a stack for this thread, because it will run on the (user) stack allocated for this kernel thread by the OS.

This function returns the thread identifier of the currently running thread. The return value should lie between 0 and THREAD_MAX_THREADS. See Solution Requirements below.

This function suspends the caller and activates the thread given by the identifier to_tid. The caller is put on the ready queue and can be run later in a similar fashion. A reasonable policy is to add the caller to the tail of the ready queue to ensure fairness (so all other threads are run before this thread is scheduled again - see the THREAD_ANY argument below). The value of to_tid may take the identifier of any available thread. It also can take any of the following constants:

The thread_yield function returns the identifier of the thread that took control as a result of the function call. Note that the caller does not get to see the result until it gets its turn to run (later). The function may also fail and the caller continues execution immediately. To indicate the reason for failure, the call returns one of these constants:

This function ensures that the current thread does not run after this call, i.e., this function should never return. If there are other threads in the system, one of them should be run. If there are no other threads (this is the last thread invoking thread_exit), then the program should exit with the supplied exit_code. A thread that is created later should be able to reuse this thread’s identifier, but only after this thread has been destroyed. (Note that we will be making more use of the exit_code in the next assignment.)

Think carefully about what you need to include in your thread control block structure, and how these structures will be used to create and manage your threads. Consider how you will implement your ready queue. Remember that the thread_yield function allows a thread to yield the CPU to a specified thread, so you may need to remove a thread from the middle of the ready queue.

Study the manual pages (http://linux.die.net/man/2/setcontext) of these two calls. Notice that getcontext saves the current context into a structure of type struct ucontext, which is typedef’d as type ucontext_t. So, if you allocate a struct ucontext and pass a pointer to that memory to a call to getcontext, the current registers and other context will be stored to that memory. Later, you can call setcontext to copy that state from that memory to the processor, restoring the saved state. (Hint: You almost certainly want a ‘struct ucontext’ as part of your thread control block data structure.)

The struct ucontext is defined in /usr/include/x86_64-linux-gnu/sys/ucontext.h on the teach.cs servers. Look at the fields of this struct in detail, especially the uc_mcontext and the uc_sigmask fields.

As noted above, when creating a thread, you can’t just make a copy of the current thread’s context (using getcontext). You also need to make a few changes to initialize the new thread:

In the spirit of “there is no magic”, for this assignment you should not use makecontext or swapcontext. Instead, you must manipulate the fields in the saved ucontext_t directly. The tutorial exercise for Week 2 will help you understand the ucontext structure.

The context structure contains many data fields, but you only need to deal with four of them when creating new threads: the stack pointer, the program counter, and two argument registers. Other than that, you don’t need to worry about the fields within the context variable, as long as you do not tamper with them. Also, it is a good idea to use variables that have been initialized through a getcontext call in order to not have bizarre behavior.

Notice that while a procedure executes, it can allocate stack space by moving the stack pointer down (stack grows downwards). However, it can find local variables, parameters, return addresses, and the old frame pointer (old %rbp) by indexing relative to the frame pointer (%rbp) register because its value does not change during the lifetime of a function call.

This is a gdb listing for the test_basic program that we will provide you for this assignment. Run gdb on it (or on any program that you have compiled on the lab machines), as shown below, to see the instructions at the start and the end of a function (e.g., main function). Make sure that you understand what these instructions are doing, and are able to answer the questions in the listing below.

Log in to MarkUs and go to CSC369. (The interface to MarkUs has changed this term - instead of a URL per course, you will be able to select your course after logging in.)

You should only modify the thread.cfiles in this assignment.

You can find the files you have modified by running the git status command.

You can commit your modified files to your local repository as follows:

We suggest committing your changes frequently by rerunning the commands above (with different meaningful messages to the commit command), so that you can go back to see the changes you have made over time, if needed.

Once you have tested your code, and committed it locally (check that by running git status), you can git push it back to MarkUs. We will collect and grade the last version pushed to MarkUs when the grace period expires. Grace tokens are consumed automatically based on the timestamp of your last push.

This assignment does not require writing a large number of lines of code. It does require you to think carefully about the code you write. Before you dive into writing code, it will pay to spend time planning and understanding the code you are going to write. If you think the problem through from beginning to end, this assignment will not be too hard. If you try to hack your way out of trouble, you will spend many frustrating nights in the lab.

As a start, here are some questions you should answer before you write code.

We strongly recommend that your first milestone might be for thread_yield(THREAD_SELF) to work for the initial thread (where your implementation stores and then restores the caller’s state). Get this working before you try to implement thread_create or thread_exit.

Use a debugger. As an exercise, put a breakpoint at the instruction after you copy the current thread’s state using getcontext. You can print the current values of the registers (in gdb, type info registers).

You may find this particularly useful in making sure that the state you “restore” when you run a newlycreated thread for the first time makes sense.