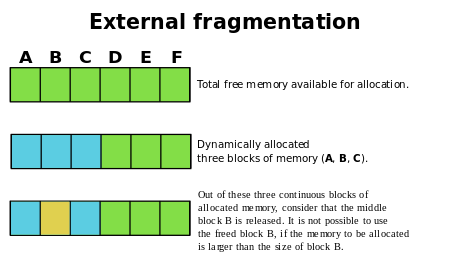 This lab requires submitting two versions of your code: one as an initial checkpoint, and the second as your final version.

In this lab you will write a dynamic memory allocator which will consist of the malloc, free, realloc, and calloc functions. Your goal is to implement an allocator that is correct, efficient, and fast.

Bugs can be especially pernicious and difficult to track down in an allocator, and you will probably spend a significant amount of time debugging your code. Buggy code will not get any credit.

This lab has been heavily revised from previous versions. Do not rely on advice or information you may find on the Web or from people who have done this lab before. It will most likely be misleading or outright wrong1 . Be sure to read all of the documentation carefully and especially study the baseline implementation we have provided.

This is an individual project. You should do this lab on one of the Shark machines.
To get your lab materials, click “Download Handout” on Autolab, enter your Andrew ID, and follow the instructions. Then, clone your repository on a Shark machine by running:

You can get some idea of your program performance and the resulting value you will get for the throughput portion of your grade. However, the Autolab servers will generate different throughput values, and these will determine your actual score. This is discussed in more detail in Section 7.

Your allocator will implement the following functions, declared in mm.h and defined in mm.c:

We provide you two versions of memory allocators:

mm.c: A fully-functional implicit-list allocator. We recommend that you use this code as your starting point.
Note that the provided code does not implement coalesce block(). Although it is a valid memory allocator, it will result in a high amount of external fragmentation, so you should implement coalescing. We strongly recommend considering all cases you need to implement before writing code for this function; the lecture slides should help you identify and reason about these cases.

mm-naive.c: A functional implementation that runs quickly but gets very poor utilization, because it never reuses any blocks of memory.

Your allocator must run correctly on a 64-bit machine. It must support a full 64-bit address space, even though current implementations of x86-64 machines support only a 48-bit address space.

Your submitted mm.c must implement the following functions:

A quality heap checker is essential for debugging your malloc implementation. Many malloc bugs are too subtle to debug using conventional gdb techniques. A heap consistency checker can help you isolate the specific operation that causes your heap to become inconsistent.

Because of the importance of the consistency checker, it will be graded; section 7.2 describes the requirements for your implementation in greater detail. We may also require you to write your checkheap function before coming to office hours.

The mm checkheap function takes a single integer argument that you can use any way you want. One technique is to use this this argument to pass in the line number where it was called.

This allows you to print the line number where mm checkheap was called, if you detect a problem with the heap. Note, however, that mm checkheap will also be called with an argument of 0 by the driver.

The semantics for malloc, realloc, calloc, and free match those of the corresponding libc routines. Type man malloc in the shell for more documentation.

The memlib.c package simulates the memory system for your dynamic memory allocator. You can invoke the following functions in memlib.c:

The practice of using macros instead of function definitions is now obsolete. Modern compilers (when optimization is enabled) perform inline substitution of small functions, eliminating any inefficiencies due to the use of functions rather than macros. In addition, functions provide better type checking and enable better debugging support.

When you run make, it will run a program that checks for disallowed macro definitions in your code. This checker is overly strictit cannot determine when a macro definition is embedded in a comment or in some part of the code that has been disabled by conditional-compilation directives. Nonetheless, your code must pass this checker without any warning messages.

Three driver programs are generated when you run make.

The driver programs are controlled by a set of trace files that are included in the traces subdirectory. Each trace file contains a sequence of commands that instruct the driver to call your malloc, realloc, and free routines in some sequence. The drivers and the trace files are the same ones we will use when we grade your handin mm.c file.

When the driver programs are run, they will run each trace file multiple times: once to make sure your implementation is correct, once to determine the space utilization, and between 3 and 20 times to determine the throughput.

The drivers accept the following command-line arguments. The normal operation is to run it with no arguments, but you may find it useful to use the arguments during development.

At debug level 0, very little checking is done, which is useful when testing performance only.

At debug level 1, the driver checks the payload contents to ensure that they are not overwritten between calls into your code. This is the default.

At debug level 2, the driver will also call into your implementation of mm checkheap. This mode is slow, but it can help identify the exact point at which an error occurs.

Additional arguments can be listed by running mdriver -h.

You must design algorithms and data structures for managing free blocks that achieve the right balance of space utilization and speed. This involves a trade-offit is easy to write a fast allocator by allocating blocks and never freeing them, or a high-utilization allocator that carefully packs blocks as tightly as possible. You must seek to minimize wasted space while also making your program run fast.

As described in the textbook and the lectures, utilization is reduced below 100% due to fragmentation, taking two different forms:

Maximizing throughput requires making sure your allocator finds a suitable block quickly. This involves constructing more elaborate data structures than is found in the provided code. However, your code need not use any exotic data structures, such as search trees. Our reference implementation only uses singly- and doubly-linked lists.

Here’s a strategy we suggest you follow in meeting the checkpoint and final version requirements: