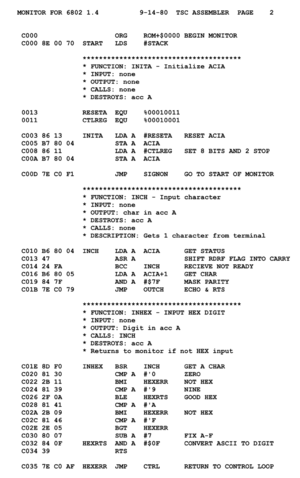 Setting up Codio for this HW

Problem 1: Working with existing TRAPS (GETC/PUTC) to “echo” keystrokes back to the user

Add to the end of user_echo.asm. Enable the program to read an ASCII character from the keyboard (using TRAP_GETC) and output it to the ASCII display (using TRAP_PUTC). Repeat this process in a loop until the user presses the

Problem 2: Writing a string to the ASCII Display

In this and the next problem, you will create a new traps: TRAP_PUTS and add it to the operating system file: os.asm. You’ll also create a new file called: user_string.asm to test your new traps (similar to how user_echo.asm tested the GETC and PUTC traps in the last problem).

This new traps will “put” ASCII strings to the screen.

What is an ASCII String?

First, let’s create TRAP_PUTS. Open up the file os.asm; look where TRAP_PUTS is located in the vector table. Then scroll down to the label: TRAP_PUTS to see the Trap’s implementation, you’ll notice it’s empty, but this is where you will be working. Implement the trap to do the following:

Calling and Testing the TRAP

Problem 3: Reading a string from the ASCII Display

Do not attempt this problem until you have problem #1 working properly. Open up the file os.asm, scroll down to the label: TRAP_GETS, you’ll notice under the label is where you will be working. Implement the trap to do the following:

And R1 would contain the number: 5 when the trap returns. The above is just an example; any valid address in data memory can be passed in by the caller and any string could be entered by the caller on the keyboard.

After you complete testing the trap, in user_string2.asm, do the following:

Create a new trap called: TRAP_GETC_TIMER. You will need to modify os.asm and create a new file: user_string_ec.asm, user_string_ec_script.txt for this problem. Your new TRAP_GETC_TIMER should do everything that TRAP_GETC used to do, except now it should “time out” if a user doesn’t enter a key in 2 seconds. How to do this? Recall that TRAP_GETC checks the status register in a loop. Before entering that loop, you could set a timer for 2 seconds. Once you are inside the loop that checks the status register, you could also check the timer too. If the user doesn’t press a key in 2 seconds, return back to the caller without checking the data register. I’ve included a TRAP called TRAP_TIMER to give you an example of how to work with the timer I/O device. Note: you cannot call one trap from another! Do you know why? Great exam question!!

Problem 4 (REQUIRED): Drawing a box on the video display

For this problem you will create a new TRAP (and test code for it) that will draw a rectangle out to the video display I/O device. The size and color of the rectangle, will be set by the caller of the TRAP.

Calling and Testing the TRAP

Implement the trap in os.asm. You’ll notice that there isn’t yet a vector for this trap, you will need to add one to the trap vector table. Also, there is no starter code for this trap, you will need to also add that in os.asm in the proper location. Determining that location is part of the problem. You can look to TRAP_DRAW_PIXEL (included in os.asm) for examples of working with video memory.

To test the trap, create a new file: user_draw.asm which should contain a simple test of TRAP_DRAW_RECT that does the following:

Lastly, be certain to create a script file to assemble and load your program called: user_draw_script.txt.

Directions on how to submit your work

You must submit two things for this HW: