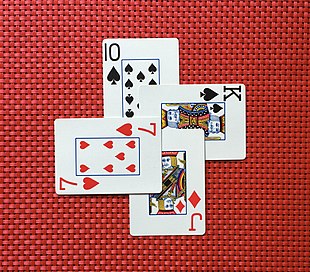 Your task is to program a simple card game with the C# language. The game can be thought of like a simplified version of the Trick-taking game.

The game has two players and both try to match each others cards. First, one player selects a card from their hand. Then the other player tries to match the card by picking a card from their own hand. If the card that player two chose has the same suit as the card chosen by player 1 and the rank is greater than the rank of player ones’ card, player two gets one point. In all other cases player one gets one point. So, first match suits then ranks. The cards won’t go back to the hand, they are discarded.

The player who won the previous round, gets to start the next one. The player to start the first round is player 1 (or the human in this case). The process is repeated until hands are depleted.

In the beginning of the game player one gets to select how many cards are drawn from the top of the shuffled deck in to both players’ hands. The count must be between 1 and the half the size of the deck.

You can return the assignment either as a link to a git repository or as a zip-file. Not both, only one or the other.